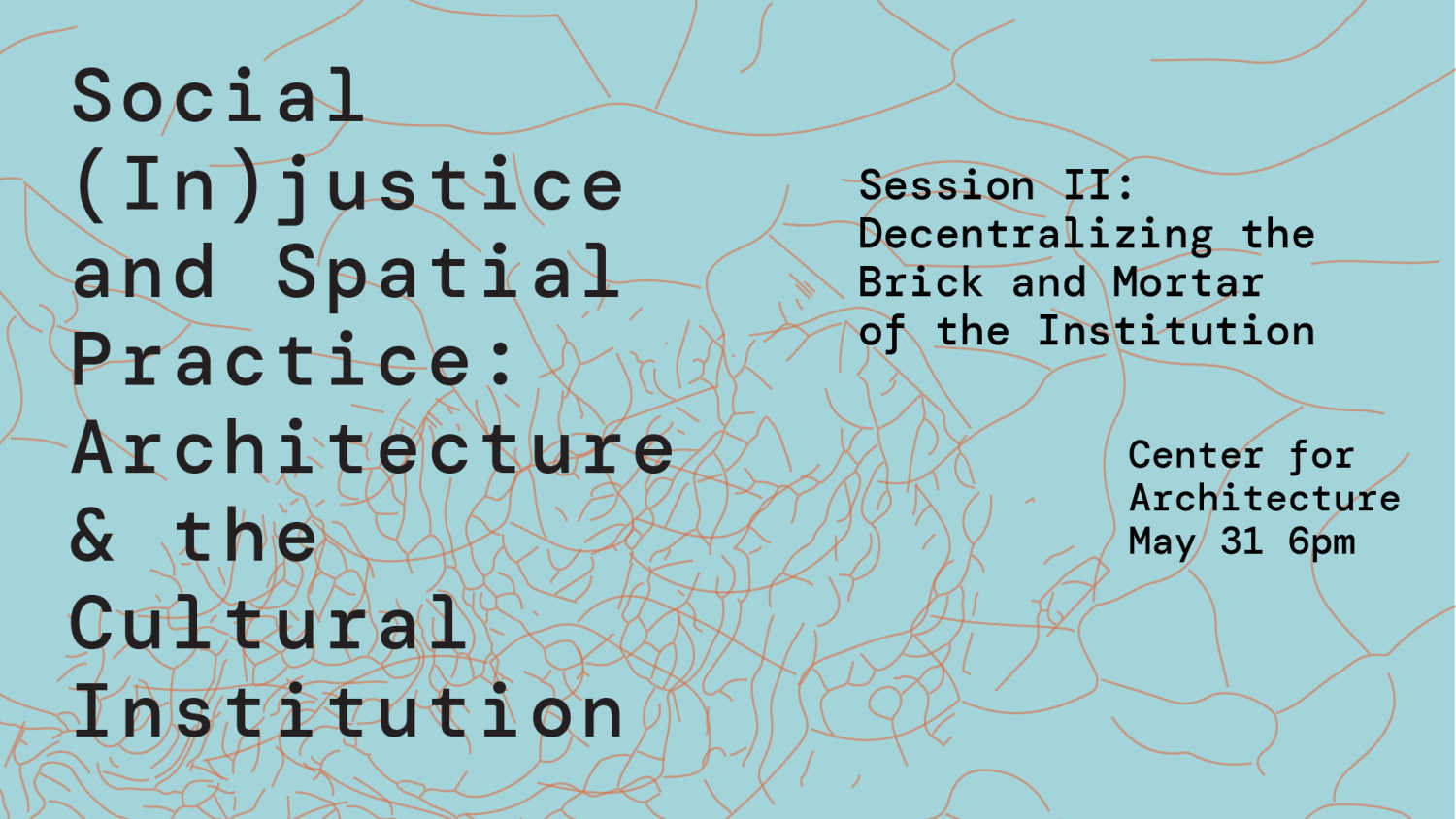 Peter Zuspan of Bureau V Architecture and Koray Duman of Büro Koray Duman have launched a dynamic discussion series as a part of the Winter/Spring 2022 Programming of the American Institute of Architects New York (AIANY) Cultural Facilities Committee at the Center For Architecture.

Social (In)Justice and Spatial Practice: Architecture & the Cultural Institution is a series of panel discussions that investigates the role of cultural institutions in social justice as it relates to architecture, design, and urbanism. The series looks at how the history of spatial practice, architecture, and urbanism has contributed to social injustice and will work to find new models for how design can play a fundamental role in fostering a more equitable future.

The past few years have been a turning point in America, as the endemic social injustices embedded in our society have finally reached widespread urgency within American consciousness. As part of an effort to rethink and reform public civic life, many cultural institutions have been working to combat their historic complacency and restructure their organizations to respond to social inequity and how to better foster a just society, while other organizations have had social justice as a part of their mission from early on.

The series looks towards institutions that are currently instigating reforms as well as those that have been consistent in their embrace of social equity and what the impact of these histories has had on the design of their institutions and the meaning of place.

Each evening in the series features two leaders in the arts, one from a visual arts organization and one from a performing arts organization, to discuss the role of the cultural institution. Each session includes a ten-to-fifteen minute presentation by each guest followed by an open discussion facilitated and moderated by Duman and Zuspan.

For information on the first series, Session I: Gentrification and the Instutution, please click here.

The second in the series, Session II: Decentralizing the Brick and Mortar of the Institution, will feature Stephanie A. Johnson-Cunningham, Executive Director of Museum Hue in Brooklyn, Kemi Ilesanmi, Executive Director of The Laundromat Project, and Lilian Cho, Senior Project Manager at Hester Street. Stephanie, Kemi, and Lilian have all collaborated to create HueArts NYC, a dynamic, data-driven online resource that spotlights POC-founded and -focused arts entities and aggregates information about these entities to promote greater visibility, self-determination, and support for communities of color that have been devastated not only during the pandemic, but for generations through systemic racism and chronic disinvestment. The evening will discuss these three important NYC institutions, as well as their collaboration HueArts, in their relation to particular points of inquiry: What type of new models are emerging for decentralizing institutions and expanding the footprint of cultural capital in the contemporary city? How does this impact the architecture, urbanism, and community of urban cultural spaces?

Well-known, well-capitalized cultural institutions are often located in privileged neighborhoods, where, historically, cultural capital follows economical capital. This model creates accessibility hardships for many marginalized and minority communities who do not live in the affluent city centers, and also promotes top-down, gate-kept models of establishing cultural importance. What type of new models are emerging for decentralizing institutions and expanding the footprint of cultural capital in the contemporary city? How does this impact the architecture, urbanism, and community of urban cultural spaces?

The event will take place in-person on Tuesday, May 31, 2022 at 6pm EST at the Center for Architecture, located at 536 LaGuardia Place, New York, NY. The Center maintains strict Covid Guidelines, which can be found here: https://www.aiany.org/health-and-safety-guidelines/

Session II: Decentralizing the Brick and Mortar of the Institution

Stephanie Johnson-Cunningham is the Co-Founder and Executive Director of Museum Hue, an organization that centers the experience of Black, Indigenous, Latinx, Asian and all Creatives of Color. As an advocate for arts and culture, she has been on the forefront of developing invaluable resources that deepens public knowledge and understanding of art, history and culture. As a United Nations Human Rights fellow centering arts and culture, she applies the UN’s ratification of cultural rights to her work to call for greater recognition and representation in the arts ecosystem. Stephanie also received the Americans for the Arts 2019 American Express Emerging Leader Award for her work. She also hosts and produces On Display, a show for The WNET Group’s multiplatform arts and culture initiative ALL ARTS that focuses on ways museums and other cultural spaces are addressing societal issues that resulted from intersecting histories and connects to contemporary life. Each episode covers various topics from immigration, mass incarceration, transportation and much more. As the United States reckons with a legacy of structural racism, oppression, and discriminatory policies and practices; she centers cultural equity as an essential part of achieving social justice. Stephanie holds a Bachelor’s degree in Art and Art History from Brooklyn College and a Master’s degree in Cultural Heritage and Preservation Studies (CHAPS) from Rutgers University.

Kemi Ilesanmi is Executive Director of The Laundromat Project, which advances artists and neighbors as change agents in their own communities. With 20yrs of experience in the cultural arena, she is inspired by the immense possibilities for joyful justice at the intersection of arts and community. Prior to joining The LP, she was Director of Grants and Services at Creative Capital Foundation where she supported the work of American artists making adventurous new work. From 1998-2004, she was visual arts curator at the Walker Art Center in Minneapolis. While there, she organized several exhibitions, including The Squared Circle: Boxing in Contemporary Art, and ran the visual arts residency program. In 2015, she was appointed by the Mayor of New York City to the Cultural Affairs Advisory Commission and has served as Chair since 2020. Observer included her on the Arts Power 50 list in 2020. She has been honored by the Metropolitan Museum and Project for Empty Space and serves on the boards of the Joan Mitchell Foundation and Smith College Museum of Art, as well as advisory boards for Brooklyn Public Library, Black Arts Future Fund, Indigo Arts Alliance, and WNET All Arts. A graduate of Smith College, NYU, and Coro Leadership NY, she is also a Sterling Network Fellow.

Lillian holds a BA in Art History and East Asian Studies from Colgate University, and is a LNY24 Fellow alumna of Coro New York Leadership Center. In her free time, she is a curator for Lincoln Center Out of Doors’ La Casita (poetry and music) Festival and serves on the boards of EOSFA, Ping Chong & Company, and Think!Chinatown. In a former life, she performed with NYC’s beloved community taiko group, Soh Daiko, giving her the exciting opportunity to meet the late Queen of R&B Ruth Brown and the world-renown KODO Japanese taiko group from Sado Island. Lillian resides in the Garden State with her family and a couple of Xoloitzcuintlin.

Peter Zuspan is the founding principal of Bureau V Architecture (BVA), a design and architecture studio based in Brooklyn, New York. BVA and its projects have won national and international awards, including numerous AIA Awards, a nomination for the Mies Crown Hall Americas Prize, Architectural Digest Innovators, and Curbed Groundbreakers. Its work has also been listed in the top ten arts centers in the world in 2015 by Architectural Record. BVA's clients have included the Brooklyn Public Library, National Sawdust, the Bushwick Starr, Chapter NY, Atlanta's Goat Farm Arts Center, Miami-Dade County, and numerous other institutions. The studio's work has been exhibited at the Centre Pompidou, the Guggenheim Museum, MoMA PS1, the Storefront for Art and Architecture, the Smithsonian Institute/Cooper Hewitt Museum, and many others nationally and internationally. Zuspan's research project entitled “The Performance of Shame: The Desegregation Renovations of Downtown Atlanta,” won the 2021 Arnold W. Brunner Grant for Architectural Research. Zuspan holds a Masters of Architecture and a Bachelors of Arts from Columbia University. He is a licensed architect in the states of New York and Georgia. He is also the Secretary of the Board of Directors of National Sawdust, a nonprofit organization dedicated to new music. Zuspan has also taught architecture at Columbia University, the University of Pennsylvania, Syracuse University, and the University of Kentucky. BVA is a certified LGBTBE.

Koray Duman is the principal of B-KD (Büro Koray Duman), a research-driven architecture and design studio based in New York and Istanbul. Established in 2013, the firm completed projects for American Society for Muslim Advancement, Finnish Cultural Institute NY, MoMA PS1 Museum, and artist Richard Prince. In 2016, the firm won an invited competition to design an Art and Archive Building for the Noguchi Museum. In 2017, Architizer honored B-KD as Emerging Firm of the Year for ‘its forward-thinking for the role of the architect and the desire to disrupt the stigma of the practice’. Among several recognitions, the firm received the 2017 Design Award of Excellence by Society of American Registered Architects, and 2020 & 2015 Best of the Year Awards by Architects Newspaper. The firm's work has been featured in publications like the New York Times, Los Angeles Times, New York Magazine, Surface Magazine, Cultured Magazine, Interior Design Magazine and Dwell. Koray is originally from Turkey where he earned a BArch from Middle Eastern Technical University and furthered his studies at UCLA with a Master’s degree in Architecture. He previously worked as the lead architect on several US west coast museum projects. He served as the chair of the New Practice Committee at AIA NYC CHapter, and a board member of the Clemente Center in the Lower East Side. He is on the advisory board of American Society for Muslim Advancement and ProtoCinema. He is an adjunct professor at Pratt and New School and a registered architect in New York State and Turkey.

The AIANY Cultural Facilities Committee is a forum for people interested in cultural spaces and how they shape our environment. Through a variety of programming the committee examines ideas related to the design and planning of cultural buildings, as well as their impact on the communities they serve. The vision of the committee is to enrich and broaden the insight of practitioners in the design field, foster an understanding among professionals working within cultural facilities, and demystify the development process for the public.