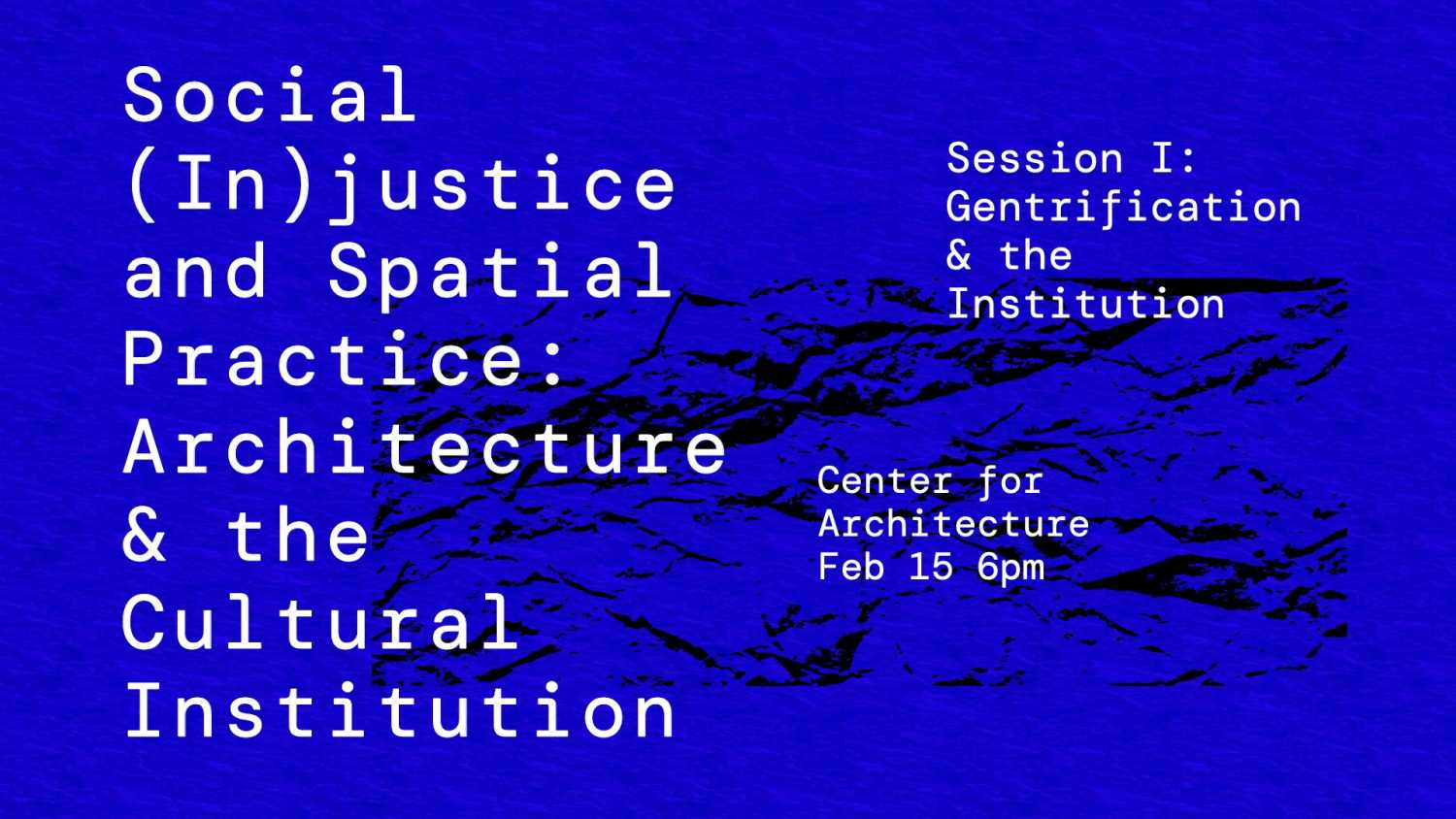 Social (In)Justice and Spatial Practice: Architecture & the Cultural Institution is a dynamic discussion series to be part of the Winter/Spring 2022 Programming of the American Institute of Architects New York (AIANY) Cultural Facilities Committee at the Center For Architecture run by Peter Zuspan of Bureau V Architecture and Koray Duman of Büro Koray Duman.

The series of panel discussions will investigate the role of cultural institutions in social justice as it relates to architecture, design, and urbanism. The series will look at how the history of spatial practice, architecture, and urbanism has contributed to social injustice and will work to find new models for how design can play a fundamental role in fostering a more equitable future.

The past few years have been a turning point in America, as the endemic social injustices embedded in our society have finally reached widespread urgency within American consciousness. As part of an effort to rethink and reform public civic life, many cultural institutions have been working to combat their historic complacency and restructure their organizations to respond to social inequity and how to better foster a just society, while other organizations have had social justice as a part of their mission from early on.

The series will look towards institutions that are currently instigating reforms as well as those that have been consistent in their embrace of social equity and what the impact of these histories has had on the design of their institutions and the meaning of place.

Each evening in the series will feature two leaders in the arts, one from a visual arts organization and one from a performing arts organization, to discuss the role of the cultural institution. Each session will include a ten-to-fifteen minute presentation by each guest followed by an open discussion facilitated and moderated by Duman and Zuspan.

The first in the series, Session 1: The Institution and Gentrification, will feature Sade Lythcott, the Chief Executive Officer of National Black Theatre (NBT) in Harlem, and Elena Ketelsen González, Assistant Curator at MoMA PS1 in Long Island City. The evening will discuss these two important NYC institutions, their historic relationships to their neighborhoods, their futures, and the overall complexities of gentrification.

The event will take place in-person on Tuesday, February 15, 2022 at 6pm EST at the Center for Architecture, located at 536 LaGuardia Place, New York, NY. The Center maintains strict Covid Guidelines, which can be found here: https://www.aiany.org/health-and-safety-guidelines/

The topics of subsequent sessions, panelists, and dates for the events will be announced shortly, to take place Winter / Spring 2022.

Session I: The Institution and Gentrification

Harlem native Sade Lythcott is the Chief Executive Officer of the historic National Black Theatre (NBT), the nation’s first revenue-generating Black Arts complex and one of the longest run theaters by a woman of color. Sade is the daughter of the late Dr. Barbara Ann Teer, founder of NBT and legendary champion of African-American arts and culture. Sade’s leadership over the past decade builds on the theatre’s 50-year legacy as a cultural destination wholly committed to telling authentic stories of the Black experience. Sade has led the organization to a position of fiscal stability, established a programmatic reach across the nation and abroad (including the launch of the National Black Theatre in Sweden), and bolstered the resources provided to Black artists as they hone their voice. (Recent productions include Dominque Morisseau’s Edward Kennedy Prize-winning play Detroit ’67 and Liza Jessie Peterson’s national tour of the Art for Justice Fund-awarded play The Peculiar Patriot that addresses the scourge of mass incarceration.)

Sade also serves as the Chairperson of The Coalition of Theaters of Color, an alliance of 52 theaters across New York City; founded by Ossie Davis and Ruby Dee in 2004 to combat the systemic inequities in the field. As Chairperson, Sade has championed the under-recognized but vital cultural work accomplished by a broad cross-section of the city’s BIPOC-led theater organizations. Collectively, this coalition has nurtured the talents of some of our most celebrated diverse artists and continues to provide vital programming to some of our most under-served communities, while preserving unique theatrical and performance traditions.

As a leader and staunch advocate for the cultural sector, Lythcott proudly serves on the national board of advisors for Art in a Changing America, HueArts NYC, and has served New York State on Governor’s Task Force to reopen live performance statewide after its shuttering in 2020. She is Co-Lead for the NYC Mayor-Elect’s Transition Team on Parks, Art, & Culture. Lythcott also co-leads Culture @ 3, an unprecedented space that gathers more than 700 non-profit cultural leaders from across NYC in regular dialogue with city government leaders to advocate for the arts as a critical component of NYC’s pandemic recovery efforts and long-term economic vitality.

As an activist, Sade’s work has been written about in national publications including the New York Times, American Theater Magazine, Harper’s Bazaar and Essence magazine. Sade enjoys guest lecturing at colleges and universities across including Harvard, Yale, Columbia and NYU.

Elena Ketelsen González is an Assistant Curator at MoMA PS1. At PS1, she has worked to establish collaborative community partnerships and organize activations of Homeroom, a space that amplifies and celebrates the work of collectives, organizations, artists, and activists connected to PS1’s public programming and community-centered initiatives. These collaborations have included Nuevayorkinos: Essential and Excluded, Black Trans Liberation: Remembrance and Mourning, and Visual Aids: A Guide to Harm Reduction. Prior to MoMa PS1, Ketelsen-González served as Curatorial Assistant and Programs Manager for the Gracie Mansion exhibition Catalyst: Art and Social Justice; Works by New York Artists and Activists since 1960. She has worked in Family, School, and Public Programs at the Whitney Museum, Brooklyn Historical Society, and Museum of the City of New York. From 2012-2015 she was an Educator in the NYC Department of Education, and a community organizer. She is the founder of La Salita, a curatorial project and long-term investigation highlighting the work of emerging and established artists working across Latin America, and Latinx and immigrant artists working within the US. Ketelsen-González frequently presents at Universities and other institutions on issues of equity for immigrant communities and liberatory and abolitionary practice in cultural spaces. She holds a B.A. in Philosophy of Aesthetics from Colorado College, and an M.S.Ed in Bilingual Education from CUNY Hunter College.

Peter Zuspan is the founding principal of Bureau V Architecture (BVA), a design and architecture studio based in Brooklyn, New York. BVA and its projects have won national and international awards, including numerous AIA Awards, a nomination for the Mies Crown Hall Americas Prize, Architectural Digest Innovators, and Curbed Groundbreakers. Its work has also been listed in the top ten arts centers in the world in 2015 by Architectural Record. BVA's clients have included the Brooklyn Public Library, National Sawdust, the Bushwick Starr, Chapter NY, Atlanta's Goat Farm Arts Center, Miami-Dade County, and numerous other institutions. The studio's work has been exhibited at the Centre Pompidou, the Guggenheim Museum, MoMA PS1, the Storefront for Art and Architecture, the Smithsonian Institute/Cooper Hewitt Museum, and many others nationally and internationally. Zuspan's research project entitled “The Performance of Shame: The Desegregation Renovations of Downtown Atlanta,” won the 2021 Arnold W. Brunner Grant for Architectural Research. Zuspan holds a Masters of Architecture and a Bachelors of Arts from Columbia University. He is a licensed architect in the states of New York and Georgia. He is also the Secretary of the Board of Directors of National Sawdust, a nonprofit organization dedicated to new music. Zuspan has also taught architecture at Columbia University, the University of Pennsylvania, Syracuse University, and the University of Kentucky. BVA is a certified LGBTBE.

Koray Duman is the principal of B-KD (Büro Koray Duman), a research-driven architecture and design studio based in New York and Istanbul. Established in 2013, the firm completed projects for American Society for Muslim Advancement, Finnish Cultural Institute NY, MoMA PS1 Museum, and artist Richard Prince. In 2016, the firm won an invited competition to design an Art and Archive Building for the Noguchi Museum. In 2017, Architizer honored B-KD as Emerging Firm of the Year for ‘its forward-thinking for the role of the architect and the desire to disrupt the stigma of the practice’. Among several recognitions, the firm received the 2017 Design Award of Excellence by Society of American Registered Architects, and 2020 & 2015 Best of the Year Awards by Architects Newspaper. The firm's work has been featured in publications like the New York Times, Los Angeles Times, New York Magazine, Surface Magazine, Cultured Magazine, Interior Design Magazine and Dwell.

Koray is originally from Turkey where he earned a BArch from Middle Eastern Technical University and furthered his studies at UCLA with a Master’s degree in Architecture. He previously worked as the lead architect on several US west coast museum projects. He served as the chair of the New Practice Committee at AIA NYC CHapter, and a board member of the Clemente Center in the Lower East Side. He is on the advisory board of American Osciety for Muslim Advancement and ProtoCinema. He is an adjunct professor at Pratt and New School and a registered architect in New York State and Turkey.

The AIANY Cultural Facilities Committee is a forum for people interested in cultural spaces and how they shape our environment. Through a variety of programming the committee examines ideas related to the design and planning of cultural buildings, as well as their impact on the communities they serve. The vision of the committee is to enrich and broaden the insight of practitioners in the design field, foster an understanding among professionals working within cultural facilities, and demystify the development process for the public.